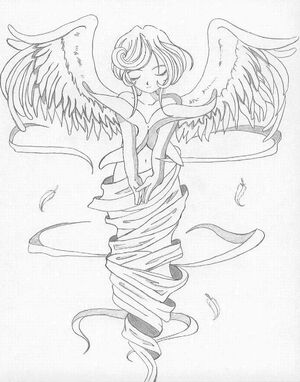 Angels are heavenly symbiotic beings. They are paired with a goddess, and aid in the casting of powerful and complex spells, as well as being a companion to a goddess. Each of the five major goddesses who has appeared thus far has an angel.

Belldandy and Peorth revealed theirs first in the manga, in the Fourth Goddess arc. Belldandy has Holy Bell (called Blessed Bell in the earlier Dark Horse releases), and Peorth has Gorgeous Rose (La Rose Magnifique in the Dark Horse release). Later on, Skuld obtains Noble Scarlet (accidently), and Urd conjures up her old angel, World of Elegance. The fifth goddess, Lind, has twin angels: Spear Mint and Cool Mint (called Coolmint and Spearmint in the Japanese version.)

There is no real demon equivalent of an angel, although Mara conjures up demon servants that don't fit the definition of an angel. However, later on, Welsper obtains a purified Tsukaima, which he names Die Wespe der Blauen Lanze (German for The Wasp of the Blue Lance). Judging from Hild's words in the Lind arc, demons are actually more powerful than goddesses (and also have fewer restrictions) and in order to balance things out goddesses are given angels.

If an angel isn't named within a certain amount of time of being obtained, it is automatically assigned a number. Also, two goddesses of second class or higher must be witness to the naming. 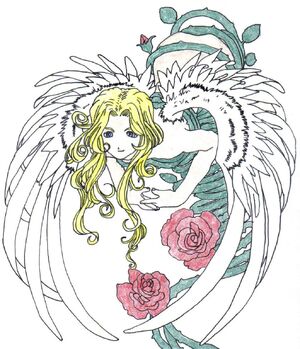 Die Wespe der Blauen Lanze was originally born from Belldandy, so it makes sense that its element is wind as well. However, one must also consider that Welsper's element is wind (as shown in his debut arc).

Angels aren't necessarily tied to their hosts permanently; Die Wespe der Blauen Lanze has switched from Belldandy to Keiichi to Welsper. However, if forcibly removed, it's enough to make a goddess unconscious. The link between an angel and their goddess is a very tight one, as Peorth puts it: "Two bodies, one heart."

Angels feed off of the power of goddesses. More specifically, a goddess's power is made by her love for others. The reason why Keiichi was able to host Cool Mint and use its abilities because he's loved by many goddesses. However, since Die Wespe der Blauen Lanze kept on using its powers on its own (in an attempt to be helpful), it kept on draining energy from the goddess who loves Keiichi most of all: Belldandy. 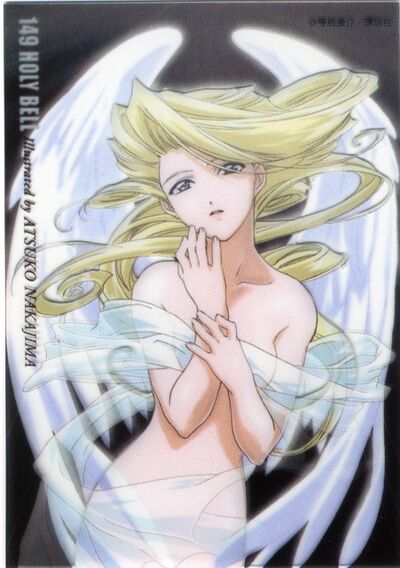 The distribution of angel eggs seems pretty lax, though. Urd was able to order one off of a heavenly equivalent of mail-order. They have a tendency to go berserk when the goddess doesn't have enough power to control it yet, and usually are sealed until they're able to be controlled. A goddess needs power so they can completely control their angel.

An angel is more than just some sort of symbiotic being that looks good, though. An angel is a goddess's closest companion, and is the mirror reflecting a goddess's true nature and innermost soul. That is why Urd's World of Elegance is black and white; it reflects Urd's ancestry of being half goddess and half demon. Lind probably had the hardest time with her angel also; since nobody knew she had a second angel with the other wing, the single wing meant to most people that she had an abnormality in her soul.

In Belldandy's own words in meeting her own angel, "it was like meeting a new, very special friend! The most understanding existence in the universe... a mirror reflecting my inner soul". It's clear that there's an emotional connection between an angel and her goddess, and angels must be absolutely obedient to a goddess's command. However, it is the goddess's cry of the heart that is far more important than the spoken word.

As an extra note, the angels that appear in the movie are most likely unpaired angels; the movie script refers to them as Angels, but they're obviously not the kind we see most often or the ones referred to on this page.

From MangaWiki, a Wikia wiki.
Retrieved from "https://ohmygoddess.fandom.com/wiki/Angels?oldid=5833"
Community content is available under CC-BY-SA unless otherwise noted.